When you book with an account, you will be able to track your payment status, track the confirmation and you can also rate the tour after you finished the tour.
Sign Up

Or Continue As Guest

When you book with an account, you will be able to track your payment status, track the confirmation and you can also rate the tour after you finished the tour.
Sign Up
1100

INCLUDED IN THE COST

NOT INCLUDED IN THE COST

The summit of the peak commands breathtaking sunrise views of the highest mountains on the planet situated at 4068m. On a clear day, you can see far up to Kanchanjanga in the east and Dhaulagiri in the the west. Apart from these, you will see Annapurna, Gauri-Shankar, Nuptse, Lhotse, Makalu, Kanchanjanga, Shisapangma, and Thamsherku peaks. Altogether, you will be photographing seven out of the fourteen highest peaks of Nepal.

You will trek and doing yoga, meditation through quaint and time-worn villages, monasteries at remote and pristine locations, and mani walls that seem surreal and larger-than-life. You will come across the distinct vegetation and wildlife that is abundant in this region. At every stop of the trek and yoga, you will come across a different kind of landscape where a unique remoteness seems to permeate.

Lying at the lower altitudes of Khumbu Region, this trek and yoga has quickly grown popular among trekkers who prefer solitude and those who want to get away from the crowd. Unlike popular trekking routes yoga, meditation of Nepal, you will encounter far less trekkers on a trip to Pikey Peak. Our route takes us from Jiri to Shivalaya and on to the remote village of Namkheli. The ascent of the peak itself is made from the Pikey Base Camp; and the incomparable views of the summit will remain in your memory forever.

This Trekking and yoga program from Discovery Mountain Trek, you will not need previous experience of peak climbing. Although the name might sound confusing, Pikey Peak is more of a trek than an actual ascent. You won’t need technical skills or equipment to reach the top. However, you will need a good level of physical fitness and a will to see the great mountains of old. These peaks will quietly inspire you from within, and renew your spirit of adventure.

Upon your arrival in Kathmandu, our staff will pick you up and transfer you to the hotel. Later, your trekking guide will represent with yoga professor and giving a brief about the trip ahead. In the evening you shall have yoga, meditation by our yoga professor.

Today an early morning we do first session of yoga, meditation practice to prepare you for a wonderful day later, having breakfast then you will be taking a scenic route along to Jiri. Traditionally, Jiri is the place where all treks to Everest began. With short breaks during the drive, we will arrive at our destination in the evening, where you shall have your second session of yoga and meditation, Stay overnight in guest house.

You start your trek after your yoga, meditation session and good breakfast. First, cross a stream and enter a hilly forest and thin settlements. Further along, you will trek through villages such as Ratomati and Chitre and later arrive at the hill of Mali Danda with great views of the nearby peaks. From there, descend along your trail through hamlets until you arrive at a river. Cross it, and walk for some time to arrive at Shivalaya. In the evening you shall have yoga, meditation and breathing practice. Sleep at Shivalaya tonight in a lodge.

Wake up early in the morning for your yoga and meditation as well as in the evening to complete your day today. Leaving behind Shivlaya, cross Chamja Khola and take a steep ascent along some shops. Further along pass a cheese factory, take a break here and cross several streams ahead to reach a long mani wall. Here you will have excellent views of Likhu Valley. Trek a little further and arrive at Deurali and further on to Bhandar where you will stay for the night.

Today we start after your Yoga and meditation session, first the trail will descend to the bank of Likhu Khola. The trail passes through farmlands, meadows and quaint villages. Along the way we will have beautiful views of several snow-capped peaks, a prominent one being Numbur Peak. Take a break along the way and then walk on an ascending path to arrive at Namkheli; but before that you will be crossing a river and enjoying the serenity in a satisfying break. You spend your time to doing yoga, meditating, breathing and allowing yourself more time to acclimatize at At Namkheli (or Gumba Danda – literally “Hill with a Chorten”), stay overnight in lodge.

An early morning we do a session of yoga and meditation, which help you on your way to ascent. First, you will walk through a forest and arrive at Ngaur (also called Ngaur Gompa). The pleasant weather and the beautiful views of glaciers will add a charm. Trek along the yak pastures and arrive at Pikey Base Camp for the overnight stay in lodge. And in the evening you shall have yoga and breathing session.

Get up early and prepare your camera kit as we will be ascending Pikey Peak. At 4068m, the peak offers unparalleled sunrise views over the tallest mountains. Some of the peaks visible from the summit are Everest, Makalu, Lhotse, Nuptse, and others. Return to the base camp, have breakfast and trek along forests and bushes of birch, fir, maple, and rhododendron, you have your yoga, meditating and breathing on the top of Pikey and all those mountain are in front of your eyes to complete your day.. After a long walk, arrive at the pass of Lamjura-La. Stay overnight at guest house.

Today you will get a place to have morning yoga session as well as evening. Start after your breakfast, we head towards Junbesi, our destination for today. First, we will pass along some villages and continue along with wonderful views ahead. An easy trek along the wilderness will bring you to the village of Junbesi where you will stay for the night at an altitude of 2680m.

Today you head to Thupten Choling Gompa. Junbesi is a spectacular village. In the morning take a stroll around the village and see the age-old ways of living in this Sherpa community. After your session of Yoga, meditation and a leisurely breakfast trek up to the gompa of Thupten Chholing, where traditional therapeutic methods are still practiced. Soak in the beauty of Junbesi Valley down below. Later, return to Junbesi and spend the rest of the day here. In the evening you have your second session of Yoga and meditation.

An early morning we do a session of yoga and meditation, and we start trek after you breakfast from Junbesi to Ringmo takes around six hours. Start by crossing the Junbesi Khola and take the ascending path to Phurtyang. You will see cattle grazing along the way and if it’s a super clear day, you might even see Mt. Everest. From here, the trail descend to Salung where the scenery gets more beautiful by the minute. Cross farmlands and rivers, and arrive at Ringmo where we’ll stop for the night. In the evening you shall have second session of yoga and meditation.

After our session of Yoga, meditation and breakfast, leave Ringmo headed for Chiwang Monastery. The green forests and hills will present a wonderful scenery for your ascent. The four-hour trek to Chiwang will be through Sherpa villages and dense forests mostly. The route is lined by views of mountains against a greenish foreground of hills and valleys. At 2,750 meters, Chiwang Monastery is located at a ridge – and is one of the three principle monasteries where Mani Rimdu is held. You have session of yoga, meditation and breathing in the evening.

Wake up early in the morning and doing practice for your yoga and meditation then It’s an easy trek. You will start with a leisurely breakfast and a slow descent along the beautiful trail. It’s most a forested trail where rhododendron will be blooming in the appropriate season. Crossing more forests and with wonderful views of the valleys below, we will arrive at the village of Phaplu. Spend the rest of the day as you feel appropriate. You shall have second session of yoga. Stay overnight in a lodge.

Today you do your first a session of yoga and meditation after breakfast pack your bags and we take you to the Phaplu airport. Normally you will arrive at Kathmandu before lunch. Transfer to the hotel and if you feel like it, you can spend the day sightseeing. In the evening, you are invited to join us for a farewell dinner.

According to your schedule, we will take you to the airport for your flight ahead. 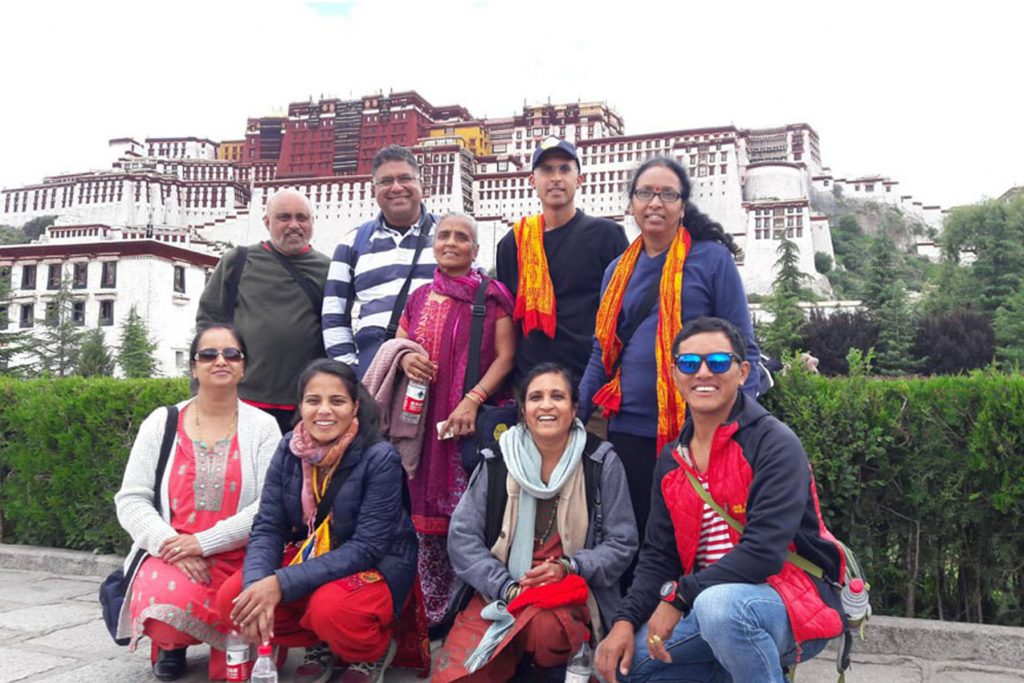 Kailash Yatra via Lhasa with Muktinath