When you book with an account, you will be able to track your payment status, track the confirmation and you can also rate the tour after you finished the tour.
Sign Up

Or Continue As Guest

When you book with an account, you will be able to track your payment status, track the confirmation and you can also rate the tour after you finished the tour.
Sign Up
1172

INCLUDED IN THE COST

NOT INCLUDED IN THE COST

This Mani Rimdu Festival is celebrated at Tengboche, Thame and Chiwong Monasteries of Solukhumbu Nepal. This is a sacred ceremonies and series of events of empowerment. It is a sequence of nineteen days celebration, which concludes with three days public festival. Sherpa get time to gather and celebrate this festival with monastic community. Lamas and Sherpa gather at the monastery for five days for the welfare of the world. Demons are quelled and the virtuous are rewarded. The monks wear elaborate mask, costumes’ and through a series ritualistic Lama dances, dramatize the triumph of Buddhism over Bon, The main first days of festival involves prayers, second day for colorful lama dancing, they wear brocade gown and wonderfully painted masks. Last day is for some humorous dances and chanting prayers. Hundred of local people and foreign tourist attend the performance. This trek rewards you to see the real and ideal culture of Sherpa people.

This Mani Rimdu Festival Trek from Discovery Mountain Trek & Expedition is a rewarding trekking experience that lets you have close-up views of Mt. Everest, Lhotse, Nuptse, Ama Dablam, Thamserku, Khangtenga, secrete mountain Khumbi-la, Taboche Peak and other peaks of the Everest region. In this trek you will see unobstructed panoramic views of the mighty peaks, see a busy culture at high altitudes, and fly to the exciting Lukla Airport – the gateway to Everest Region.

The date of the Mani Rimdu festival is fixed according to the Tibetan Lunar calendar. The head lama at the Tyangboche Monastery announces the dates. In Tengboche the Mani Rimdu is performed in the 9th Tibetan month which usually falls in October or November full-moon. Mani Rimdu Festival date for the year 2019 is celebrating on 12th, 13th and 14th November 2019.

After landing at the Kathmandu airport, Discovery Mountain Trek will take you to the hotel Radisson. We then check-in at the hotel, freshen up and take a rest. In the evening you will have details briefing for your trek.

We take an early morning flight to Lukla which is where all Everest treks begin. We meet the rest of our team in Lukla and start trekking from there. We walk on a trail that gradually descends to Cheplung village from where we get a glimpse of Mt. Khumbila, a sacred mountain which has never been climbed. From here, we gradually descend until Phakding

Our trail passes through a pine forest and we continue our walk on the trail that goes north up the Benkar valley. We cross Dudh Koshi River and pass Chumoa and Monjo villages before reaching the entrance of the Everest National Park. Then after crossing a suspension bridge, we pass Jorsale village and walk alongside of the Dudh Koshi and Bhote Koshi rivers. We ascend on a steep trail and reach Namche Bazaar which is probably the biggest town in the Everest region.

We can tour Namche Bazaar which is the primary town of the Everest or Khumbu region and has government offices, ATMs, internet cafes, shops, restaurants, and a colorful market. We can hike-up to Sagarmatha National Park and enjoy the sunrise over the Himalayas including Mt. Everest, Lhotse, Nuptse, Ama Dablam, Thamserku, Kongde and so on. If we are interested in a day hike, we can trek to Khumjung village. Today we also visit the Hillary School and a monastery which houses a yeti scalp!

We start our trek till reaching Kyanjuma and takes about 1 & half hour. Then it climbs down to the Dudh Kosi River and crosses a suspension bridge. We can see a series of picturesque water driven prayer wheel. Then we will have lunch in Phungi Thangna. The steep ascent brings us to Tengboche village. We can visit the monastery in the evening. The views of the mountains, Sunrise as well as Sunset are spectacular in the morning and evening.

Mani Ramdu is divided into six Preparations:
1. Construction of the Sand Mandala
Sand mandala is constructed step by step. Colored sand is used to build complicated and symbolic design. Sand mandala takes many days to complete. Defensive blade symbolizing deities are placed around the Mandala. The bowl of Mani Rilwu pills (spiritual medicine) is placed above the center. The Mandala symbolizes the palace of Garwang Thoze Chenpo (Lord of the Dance). Creation of the Buddha of Kindness, the main idol of Mani Rimdu. The mantra “OM AH HUNG RHI, OM MANI PADME HUMG” is repeated thousands of times by the monks during the weeks of ceremony before the public festival. During meditation, they imagine kindness flowing in the form of the mantra, into the Mandala and the Mani Rilwu pills. Kindness then releases out from the Mandala, blessing all those who attend the Mani Rimdu festival.

2. Wong (The Empowerment)
The Wong is the opening day of public ceremony. It´s performed on the full moon day, of the tenth month in the Tibetan lunar calendar. The sacred Mani Rilwu (sacred or blessed pills) and Tshereel (pills for long life), are given to everyone attending.

3. Chham (The Dances)
The dances take place on the 2nd day of Mani Rimdu.Symbolic demons are conquered, chase away, or transformed to Protectors of Dharma. As the theme of the dance positive forces fight with those of disorder through the dances. The dances convey Buddhist teaching on many levels from the simplest to the most philosophical. During the dance the monks are believed to become divine being. The dances are only performed during Mani Rimdu because they are considered to be very Sacred, and not for ordinary entertainment.

4. Ser-Kyem
Ser-Kyem is most commonly used to make tea offerings to Dharma guards such as Mahakala. It has two pieces: a larger raised dish-shaped bowl and a smaller raised offering bowl. The smaller is placed in an upright position in the larger dish when the offering is being made. When not in use, the smaller offering bowl is placed upside down in the larger bowl. The food offerings can also be placed in the larger dish when in use.This offering of spiritual nectar is made in many ceremonies. The six dancers represent Ngag-pa, Tantric magicians. They make offerings of alcohol from silver vessels, and small tormas, to the Lama, Yidam, Khandro, and Shi-Dak (the Earth deities). A Buddhist consultant takes ‘refuge’ in the Lama (spiritual guide), Yidam (personal deity) and Khandro (wisdom dakini). A central theme in Tibetan Buddhist practice is to make offerings to these beings, so that they will help with the virtuous actions which lead to Buddhahood.

6. Chhingpa
The next dance portrays the Four Protecting Ghings, defending the Buddhist faith against attack by demons. Shining paper masks hide the faces of the dancers, each a different color and each displaying a constant smile. The dancers´ hops are rhythmically accompanied by the beating of cymbals.The dancers charge at children in the audience and scare them as for fun. The Dakini dance is performed genially. Slow motion dance steps, keeping perfect time with the soft tinkle and slow beat of bells and drums is performed by five young priests. The dancers are without masks, and portray female spiritual figures; the partners of Padmasambhava. It is believed that they come from his pure land of Shangdok Palri where they live within his mandala. They herald the imminent arrival of Guru Rinpochhe at the Mani Rimdu.Two of the Ghing are male, and carry cymbals, while the two females carry drums. The males represent skillful means and the female represent wisdom; these two aspects of the path The torma is made from barley flour and decorated with colored butter. It begins by symbolizing the body of the deity, and by the end of the ceremony, symbolizes enlightenment itself. It stands in the front of the mandala on its own shrine, at the very heart of the temple.

This day after breakfast, we return back same way to Namche bazaar. Firstly our trail steep descents to Dudh Kosi River and again trail ascent brings us to reach Kyangjuma village and it takes 3 hours. We will have lunch there. After lunch the trail continues straight until reaching Namche and takes about 2 hours to reach.

We will leave the Namche Bazar and trail descents through pine trees and cross the high suspension bridge over the Dudh Kosi River. Then our trail continues River side and we arrive in Jorsalle and it takes about 2 and half hours. We continue again our trek until reaching Phakding with crossing several bridges about 1 and half hours walk. We will have our lunch there.

We began our trek by crossing the first suspension bridge today, it is mostly a uphill pass by several villages, after reaching Lukla we spend rest of the day taking rest and today we will be our last day on the mountain with our staff.

DAY 11 : FLY BACK TO KATHMANDU

We take early in the morning flight to kathmandu. After reaching in Kathmandu transfer to hotel and Afternoon we start our visit to two of the most historical and spiritual attractions in Kathmandu, the sacred Hindu temple of Pashupatinath, and Buddhist shrine (Bouddhanath), which is also one of the largest stupas in the world. There will be a farewell dinner in the evening to celebrate the successful completion of our journey.

Our adventure in Nepal ends today. Discovery Mountain Trek drop you at airport a few hours before the scheduled flight. 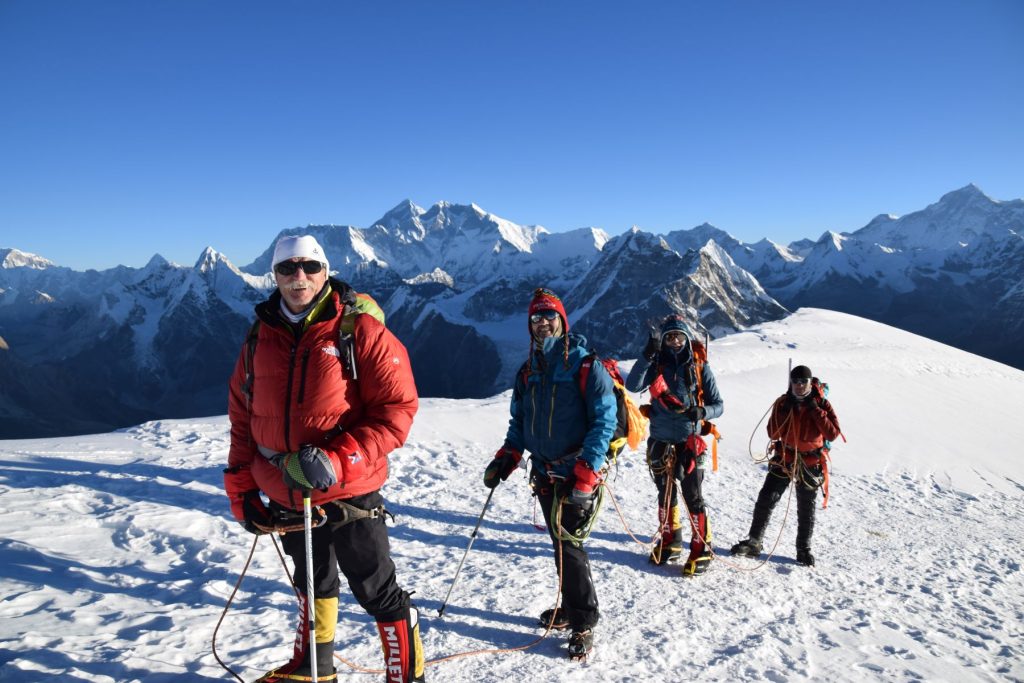